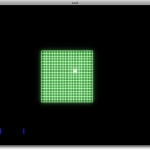 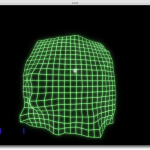 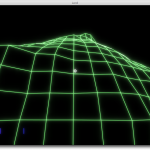 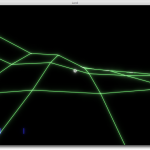 So I’ve been making more progress on the Game in a Week.  No game screenshots to show yet, but here’s a neat piece of tech that I’m using, which will be finding its way into MMORPG Tycoon 2.0.  What you’re looking at again is a slow zoom-in on a very, very small terrain in wireframe view.

Notice that when fully zoomed out, the terrain appears as a flat map directly beneath the camera, but as you zoom in mountains begin to appear, and then the terrain begins to take on the gentle curve of a globe, and the camera begins to automatically pitch upward to give you a ground level view of the scene (and let you see the sky, beyond the horizon).  Topologically, the terrain it’s actually a torus that just happens to sort of resemble a sphere.  Had to cheat and do it that way, in order to allow the map to unwrap into a flat rectangle without distorting.  And you don’t want to know how much time I wasted making this math work.  But it’s sort of neat, and I’m looking forward to releasing the game.