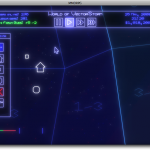 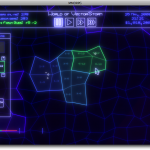 So I’ve been doing a bunch more development on my MMORPG Tycoon project, and wanted to put up some new screenshots.

These screenshots were taken about twenty seconds into a new game.  You’ll see that I’ve got about 300 subscribers (most of whom are currently connected), and have earned a little money on top of the $1,000,000 starting loan (mostly from the purchase price paid by my subscribers).

The first shot is a zoomed in view, and shows the build toolbox which lets me place towns, respawn points, and starting areas.  Or move them (top icon), or remove them (bottom icon).

The second shot is zoomed out more, and shows me placing a mid-levelled area using the new zoning interface.  I’m not 100% happy with it yet, but it’s better than it was.  You can see the level range for each zone drawn in the middle of each region, for easy reference.

Most of the work has gone into UI stuff;  making buttons work as one would expect, etc.  But there’s also been a lot of work on closing the loop.  Players are a lot smarter, and are now unsubscribing when they’re unhappy, leaving forum posts even while they’re still logged in, and new players joined based upon how much buzz the game has, and how positive/negative it is.

So my next task is to find a way to communicate to the player what problems players are encountering;  as an MMORPG grows, it becomes harder and harder to figure out what the problems are.  And worse, once you’ve identified the problems, it’s not always obvious how to fix them.  I need to make players try to avoid heavily congested regions;  that might help some of the problem.  And of course, I still need to let the player place key quests, to move players around.

But in general, I’m pleased with progress.  And tremendously scared that I only have a week left to finish the project!  :)